SEA women social entrepreneurs scale deep, up and out to enact systemic change

Women hold up half the sky, but the reality remains that they are severely underrepresented in leadership positions across different sectors all around the world. 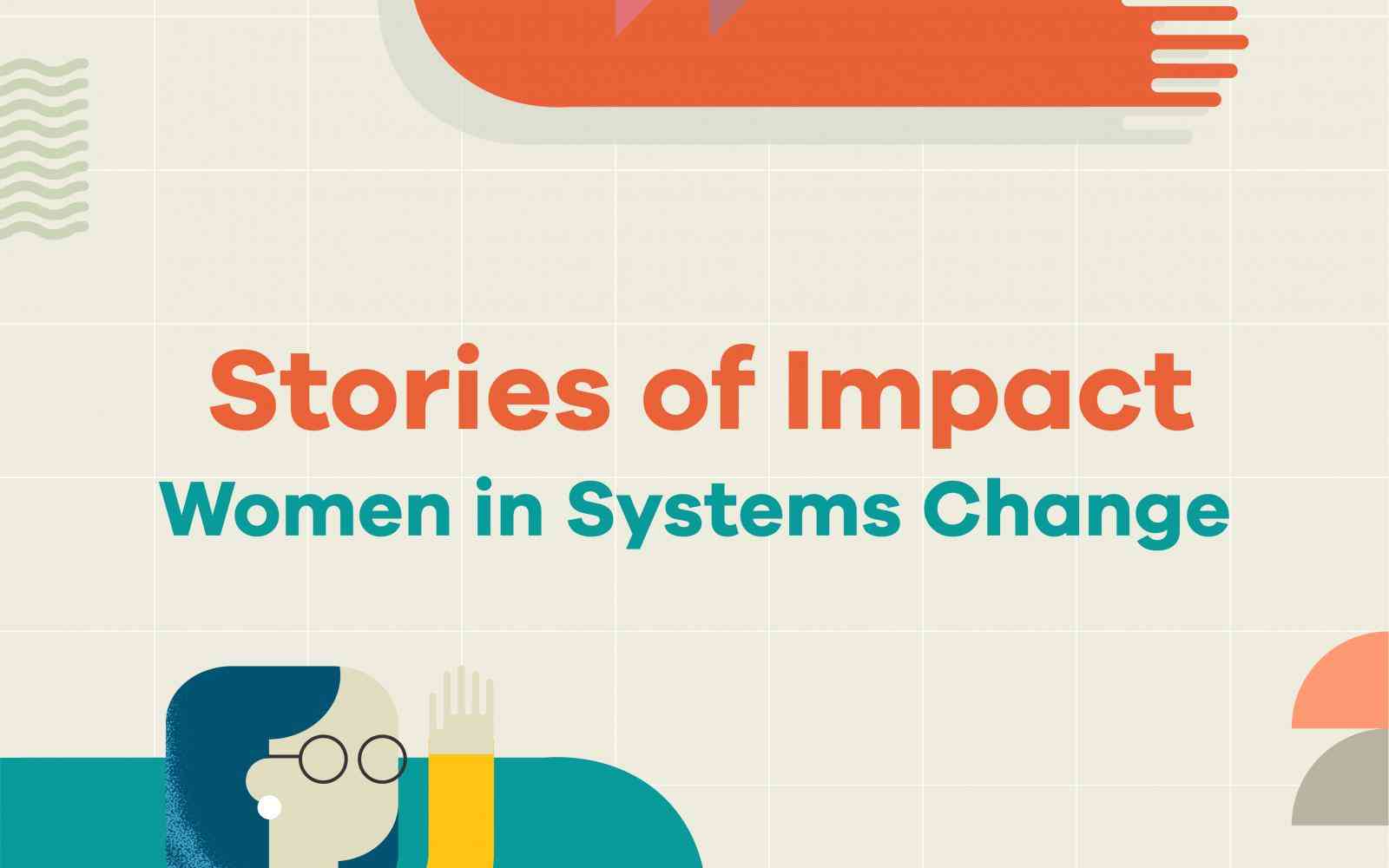 From parliaments to boardrooms, gender reports have shown a disparity in female voices in seats of power, where their concerns can be acknowledged and genuinely heard.

Despite this gap, women in social entrepreneurship have made strides in ushering in change. This is evident in the impactful work of women social entrepreneurs elected in the Ashoka Fellowship in the past four decades, which represents 38 percent of its global network, according to Dr. Iman Bibars, Ashoka vice president and Ashoka Arab World regional director.

To further deepen their changemaking, however, there needs to be a continuous push for systems change. For Ashoka, this term describes both an outcome and an approach to social change.

In terms of outcome, a change is systemic if the way a system operates shifts, and as a result, it produces a more positive outcome itself, according to Florian Rutsch, who co-leads the Ashoka Europe Fellowship program.

“A system change follows a change in the root causes of an issue, as opposed to a surface level change which only addresses symptoms,” he said.

Meanwhile, as an approach, systems change requires breaking away from linear relationships, and instead employing strategies based on scaling indirect impact. This would allow further reach by changing existing dynamics. In this case, collaboration and openness are critical.

Pushing for systems change requires different strategies from social entrepreneurs as well, said Bibars. Quoting a paper from Michele-Lee Moore, Darcy Riddell and Dana Vocisano in 2015, she identifies these strategies as scaling deep, scaling up and scaling out.

In Southeast Asia, female Ashoka Fellows are creating systemic solutions to different social and sectoral issues by using these three strategies. At best, they integrate these strategies with each other, making a lasting and meaningful impact on their communities.

In picturesque Palawan in the Philippines, Amina Evangelista Swanepoel’s organization Roots of Health plants seeds of change in the lives of women and youth by confronting the deep-rooted stigma surrounding sexual and reproductive health. These efforts allow the organization to scale deeply, by focusing on shifting cultural values and beliefs. 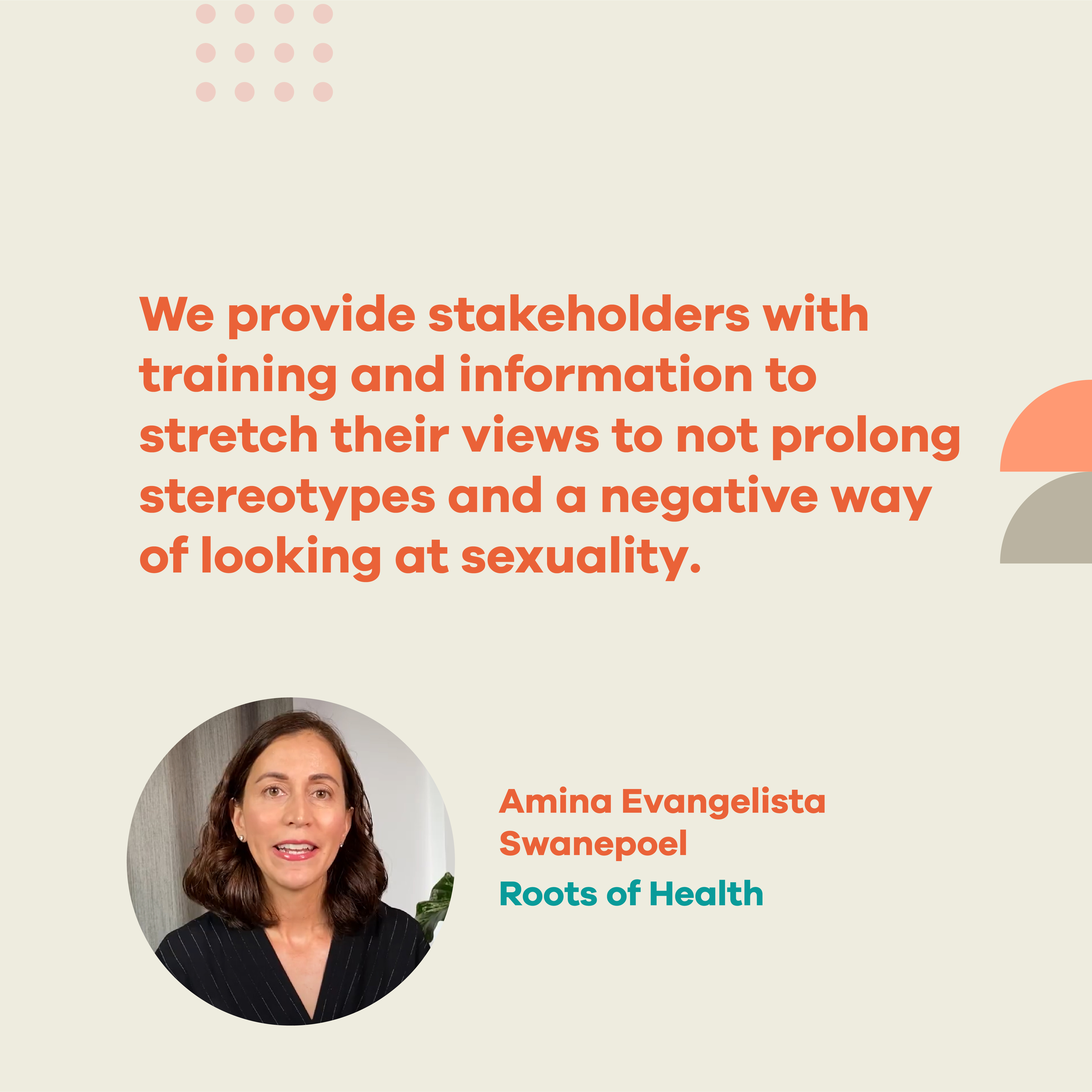 Discussions on sex remain taboo in the Philippines, a predominantly Catholic country. A prevalent culture of shame and contempt related to sexuality and family planning has led to rapidly increasing rates of teenage pregnancy, HIV infection and maternal mortality in the country.

Roots for Health seeks to address this by providing comprehensive, inclusive and safe spaces for women and young adults where they could learn about reproductive education and get access to services.

Swanepoel, who was elected to the Fellowship in 2017, has further dived deep into this significant work. Aside from engaging government offices, local officials and healthcare workers, her project works closely with community health and youth advocates, who are trained to communicate sexual health in their respective communities. In turn, they become reproductive health champions that ensure the sustainability of the program beyond its initial reach.

“We’ve also started working with parents because we recognize that parents are key and integral to shaping how young people’s sexuality develops,” Swanepoel said.

The past 12 years for Roots of Health have proven meaningful, with thousands of women and girls now having access to their modern contraceptive of choice every year and learning more about family planning. The project has also supported municipalities with trained screeners for HIV.

Swanepoel said it did not come without challenges. Sometimes the people she speaks with, such as those from religious institutions or government agencies, do not always see eye-to-eye with her.

“We use data a lot when talking to people… but we also have qualitative surveys… so we share the realities of the lives they have,” she said. “Changing hearts and minds, that’s often our first step.”

“A lot of people aren’t really kind of open to really changing how they view everything… but if we’re able to get them to kind of just even shift a little bit, we see that as a success story,” she added.

For Girlie Garcia-Lorenzo, executive director and founder of Kythe Foundation, collaborating with important stakeholders is necessary for enacting change in the lives of children with cancer and their families and carers.

The foundation transforms Philippine public hospitals by integrating a holistic system for psychosocial support for indigent patients and their families.

From the point of disclosure to the very end of the child’s illness, Kythe works with patients and their families by educating them about the illness and preparing them for medical procedures. It also provides safe spaces for children to play with toys and read books where they can feel comfort amid the often depressing hospital environment.

Not only does Kythe work with the hospital management, but it also applies a bottom-up approach by tailoring their programs to social workers, nurses and pediatricians who work closely with children and their families and carers.

Under Garcia-Lorenzo’s leadership, the foundation has also collaborated with the Department of Health. Her tireless work since the early 1990s bore more fruit with the integration of child life services in the National Integrated Cancer Control Act, which was passed in 2019. 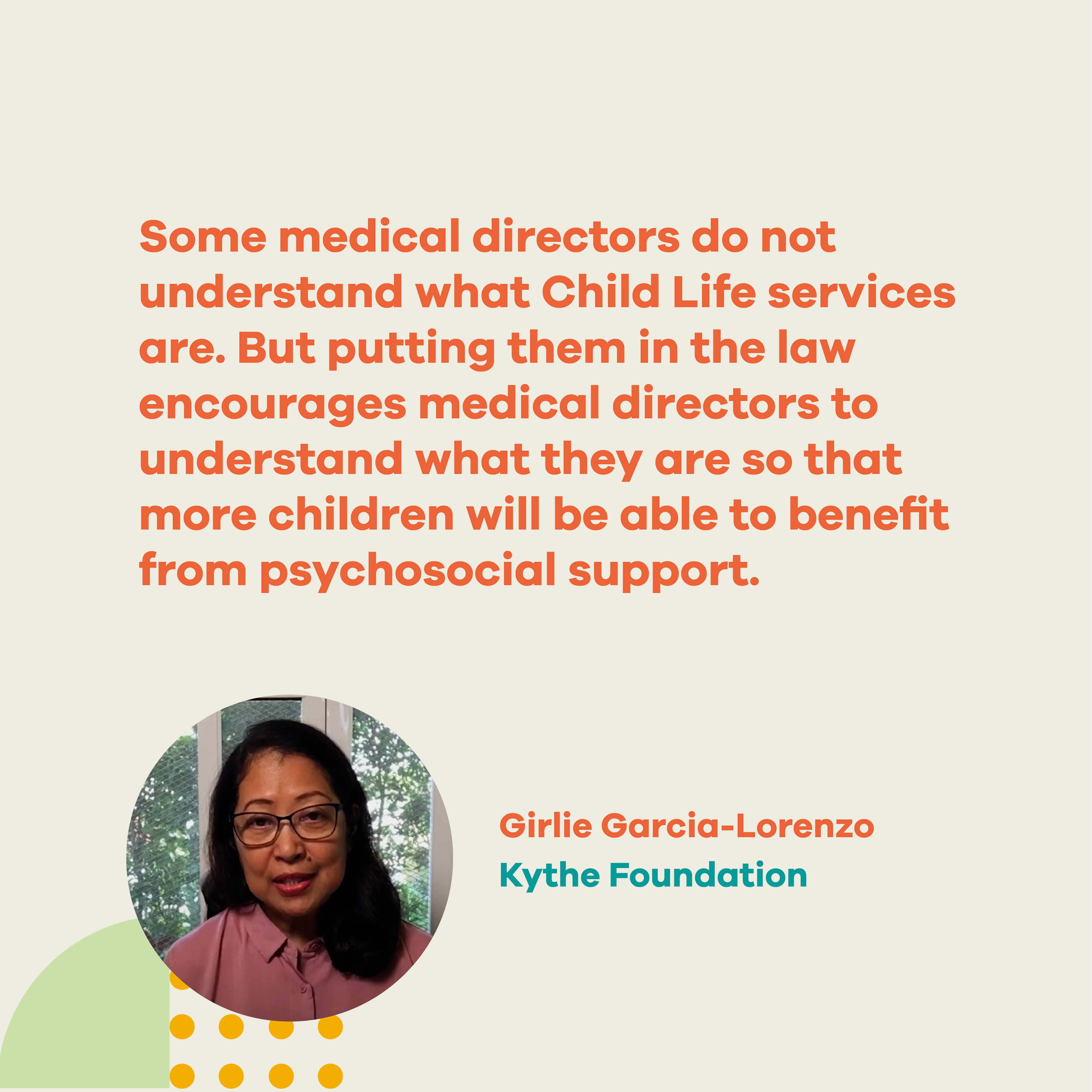 Garcia-Lorenzo, who was elected to the Ashoka Fellowship in 2013 and also serves as the president of the Philippine Alliance of Patient Organizations, said putting child life services in the law makes it mandatory and encourages medical directors of hospitals to understand the psychosocial needs of children suffering from cancer.

Kythe’s work is a clear showcase of scaling up, which includes developing new policies, advocating the advancement of legal changes and redirecting institutional resources. This strategy, said Garcia-Lorenzo, allows them to reach more children and families who are in need of their services.

When scaling up, she emphasized how important it is to develop a concrete and definite concept, document progress as proof, and continuously monitor, evaluate and analyze its impacts.

“This definitely doesn’t happen overnight. It would take years,” Garcia-Lorenzo said, as a piece of advice to people seeking to make similar lasting change. “We did not stop because we are very committed to our advocacy.”

“Even if it was not bearing fruit in the early years, we just kept on because, in our minds, we were saying that we’re not doing this for ourselves,” she said, adding: “It’s for the kids, always and in all ways.”

To tackle malnutrition among infants and young children, Ines Fernandez spearheaded an organization called Arugaan (a Filipino word that means to “nurture fully”) to empower and mobilize mothers.

It is an important movement in the Philippines. UNICEF said nearly a hundred children in the country die every day from malnutrition. At least 27 out of 1,000 Filipino children do not get past their fifth birthday, and a third of Filipino children are stunted, or short for their age.

For both women and their newborns, the risk of malnutrition and food insecurity heightens amid disasters brought by storms, earthquakes and volcanic eruptions, which are common in the Philippines.

To combat these challenges, Arugaan empowers both young and old mothers to understand the benefits of breastfeeding and learn how to make baby food with ingredients that are locally available. Such networks of trained mothers have become experts in lactation and nutritious food preparation and have led mother-to-mother support groups that could spread best practices in their community.

In the years since its conception, the organization’s core group has also branched out to many health professionals, volunteers and organizations with similar purposes, serving as a “mother to many mother support groups.” This is an example of scaling out, or having a wider impact on more people through replication of programs and their dissemination to different areas. 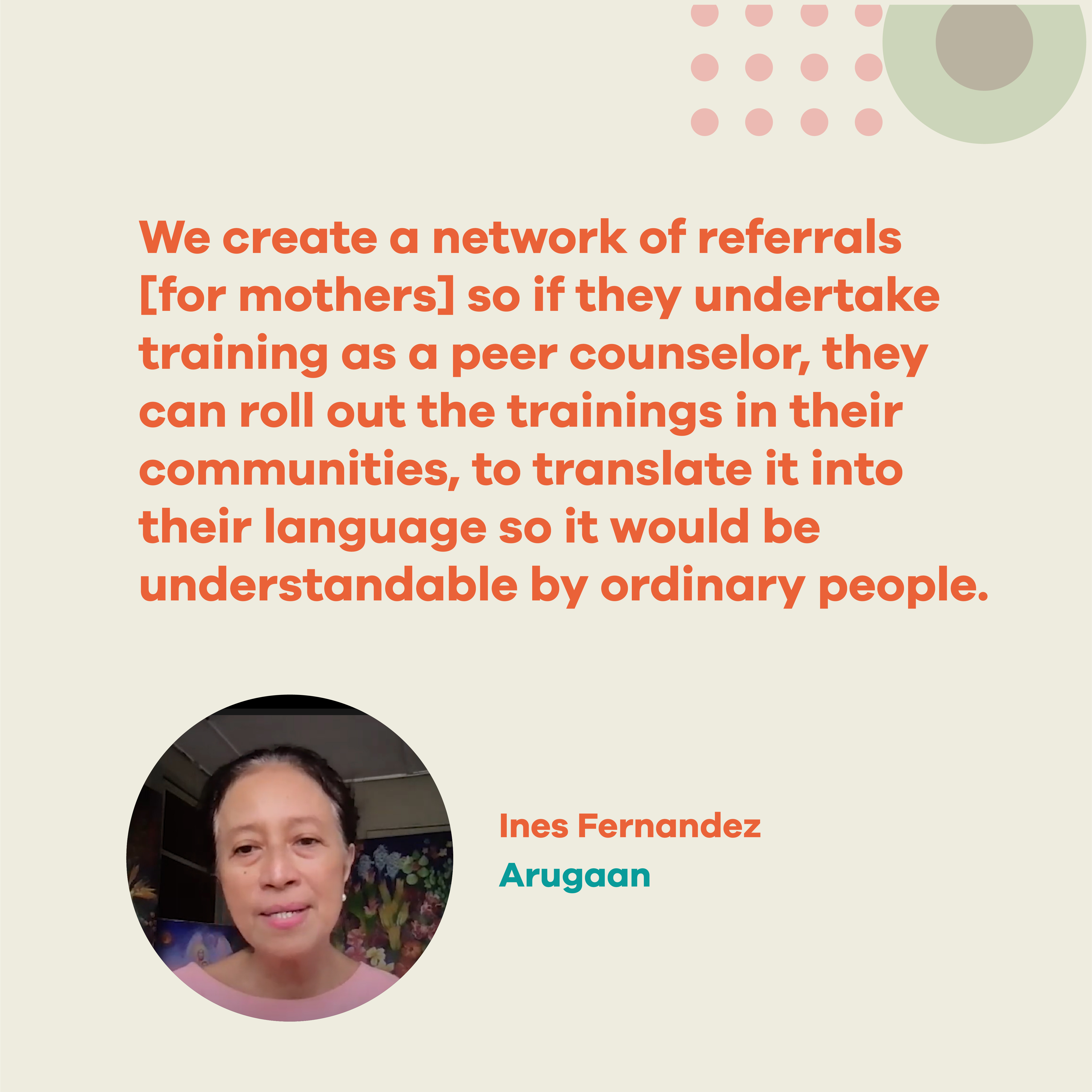 “It’s a very caring, compassionate support [system] for women,” said Fernandez, who was elected into the Ashoka Fellowship in 2014. Amid the restrictions under the COVID-19 pandemic, they adapted by creating online consultations and chat groups where they can continue sharing information and life experiences.

Mothers are also empowered to become active in policy making and in ensuring that their breastfeeding rights are protected in their workplaces, she said. They visit government officials, write letters to those in positions of power, launch campaigns, and face the media.

Arugaan is now also stretching its important work beyond the Philippines.

“We are now involved with our International Baby Food Action Network, covering 11 countries [in] Southeast Asia,” Fernandez said. “Now [the mothers] are consulted by the UNICEF [and the] Department of Health for our national planning of maternal, infant and young child feeding… They are now involved and it is culled from their life experiences as mothers.”

Combining these three strategies have proven effective in the work of Nani Zulminarni, regional leader for Ashoka Southeast Asia.

Through her nationwide organization Program for Women Headed Households in Indonesia (PEKKA - Perempuan Kepala Keluarga), hundreds of women’s groups in villages and provinces in Indonesia work together to support women heads of households to become more socially visible and politically empowered.

Zulminarni begins with economic empowerment programs that focus on small businesses and personal savings and loans. By helping women heads of households to see their roles in a new light, they become leaders in their own communities, leading campaigns for domestic abuse prevention and peace education, among others.

Their work has now reached 34 provinces, with more than 1,500 community-based organizations.

Along with the women leaders, Zulminarni also works to change discriminatory laws and policies in Indonesia at the national level.

“Every problem is multi-dimensional and intersectional,” she said. “For example, we cannot only see poverty from an economic perspective, because [it] is also related to political and social systems, to culture, traditions, attitudes, and information. That’s why we need to approach everything from the systemic [lens].” 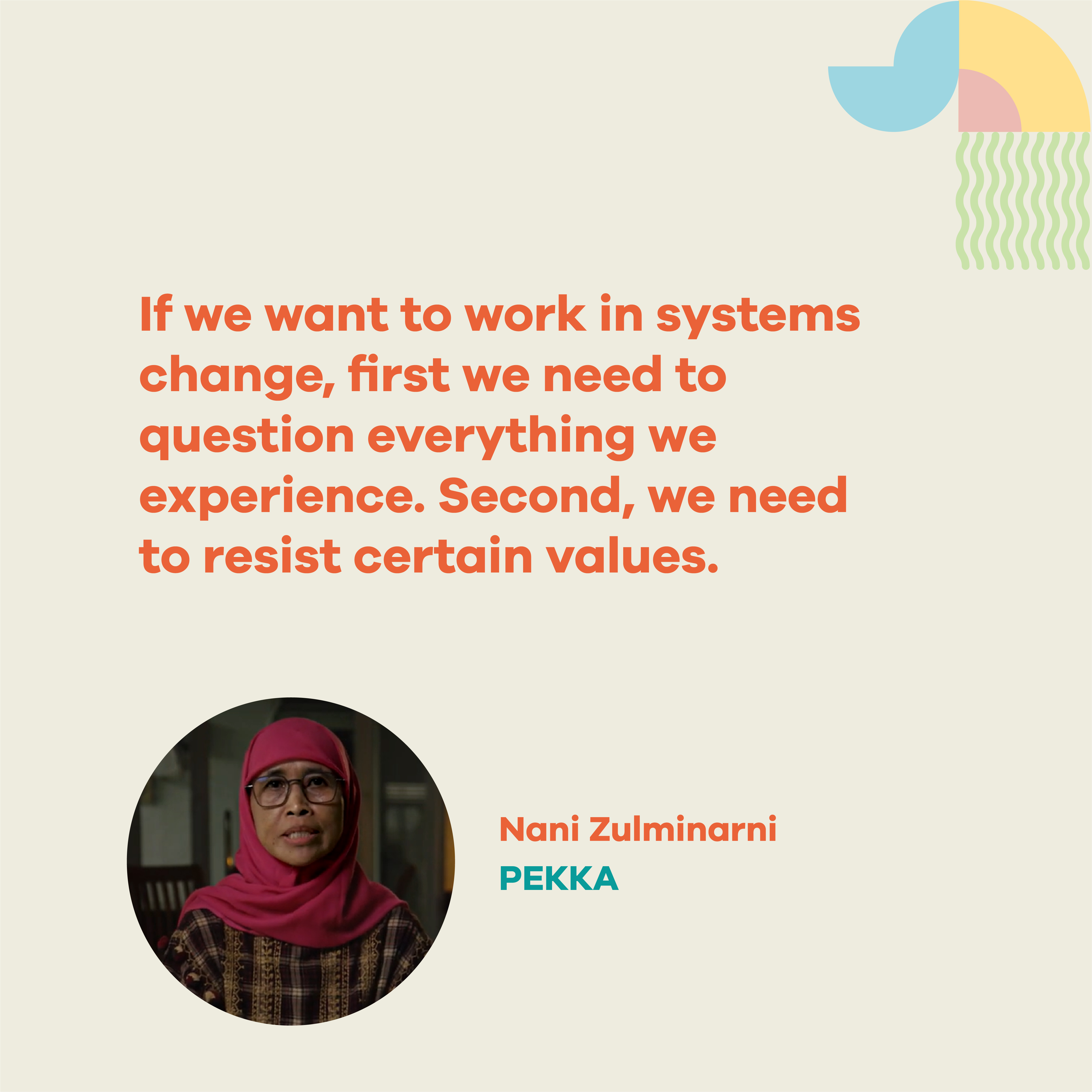 The inspiring works of these four leaders show that women play crucial roles in pushing for systemic changes and making meaningful changes in their community that can ripple out to others.

Back in the Philippines, Swanepoel said the first important step is making sure that women social entrepreneurs fully understand the system: the ins and outs, all the players, and what has been done or not done.

“Once you have that very comprehensive understanding, then it’s time to build your teams, build your coalitions,” she said. “Systems change cannot be done by one person alone. By nature, it has to be collaborative… because changing an entire system has so many different facts, so many different aspects of the work.”

Adaptability in the face of changing times and immense pressures is also important, said Garcia-Lorenzo.

“You need to be able to zoom in, zoom out, expand, contract for you to survive,” she said.