“Rather than looking at the world at the lens of age conflict, we need to adjust to this multigenerational moment that’s already washing over us,” says Ashoka Fellow Marc Freedman. 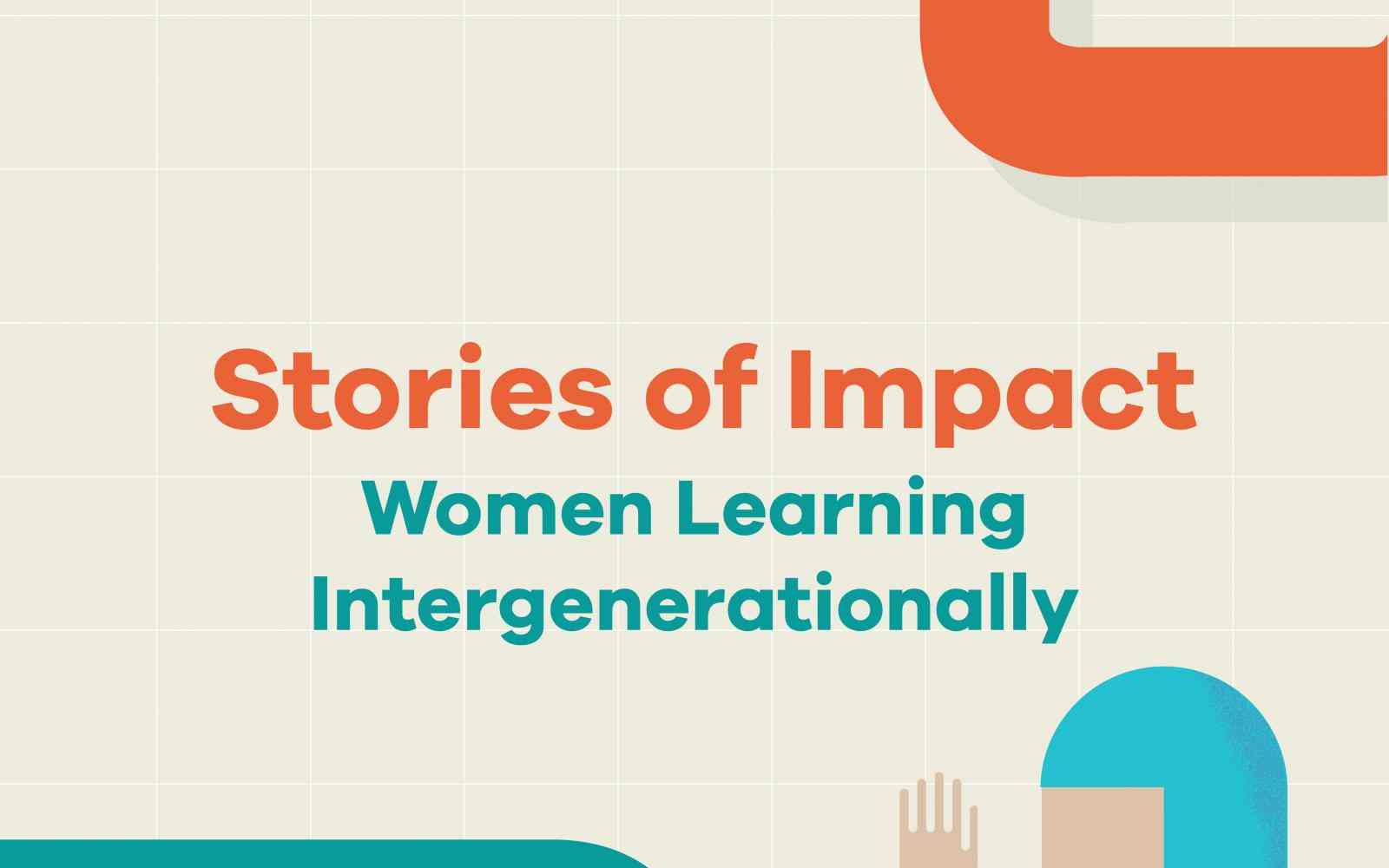 Boomers. Millennials. Gen Zs. Today, the differences between these generations cannot be more distinct. With the rapid boom of technologies in the past few decades, the chasms that divide the young ones and the once young further deepen.

With their differences in interests, behaviors, and beliefs, members of each age group often tend to look at others with disdain. Leaving such gaps unfilled, however, can lead to missed opportunities to grow and learn from each other, may it be the wisdom of the elder generations or the smarts of their younger peers.

“Rather than looking at the world at the lens of age conflict, we need to adjust to this multigenerational moment that’s already washing over us,” said Ashoka Fellow Marc Freedman, co-founder of  Encore.org, a nonprofit that works to create meaningful collaborations between older activists and young leaders to help bridge their divides.

For women social entrepreneurs (WSEs), these generational connections can prove beneficial in their roles as changemakers in their communities.

A 2020 report by Ashoka, in partnership with S&P Global Foundation, revealed that WSEs in Southeast Asia felt there was a lack of mentorship when they were starting out their own enterprises. The same report pointed to traditional gender roles as the main barriers in their work.

Now, these women are keen to forward their knowledge to the next generation of changemakers, seeing it as an “investment” in the future of women social entrepreneurs.

“Successful WSEs have done breakthrough work and were pioneers in their field,” the report said. “Their immense experience can bring valuable guidance for younger WSEs tackling the same issues.”

Diena Haryana, founder of the nonprofit Semai Jiwa Amini (SEJIWA) Foundation in Indonesia, has personally experienced challenges in pioneering changes in her home country. She formed the organization in 2004 to promote child protection and campaign against child bullying. She recognized that the root causes of this violence are the absence of good parenting models and supportive environments. 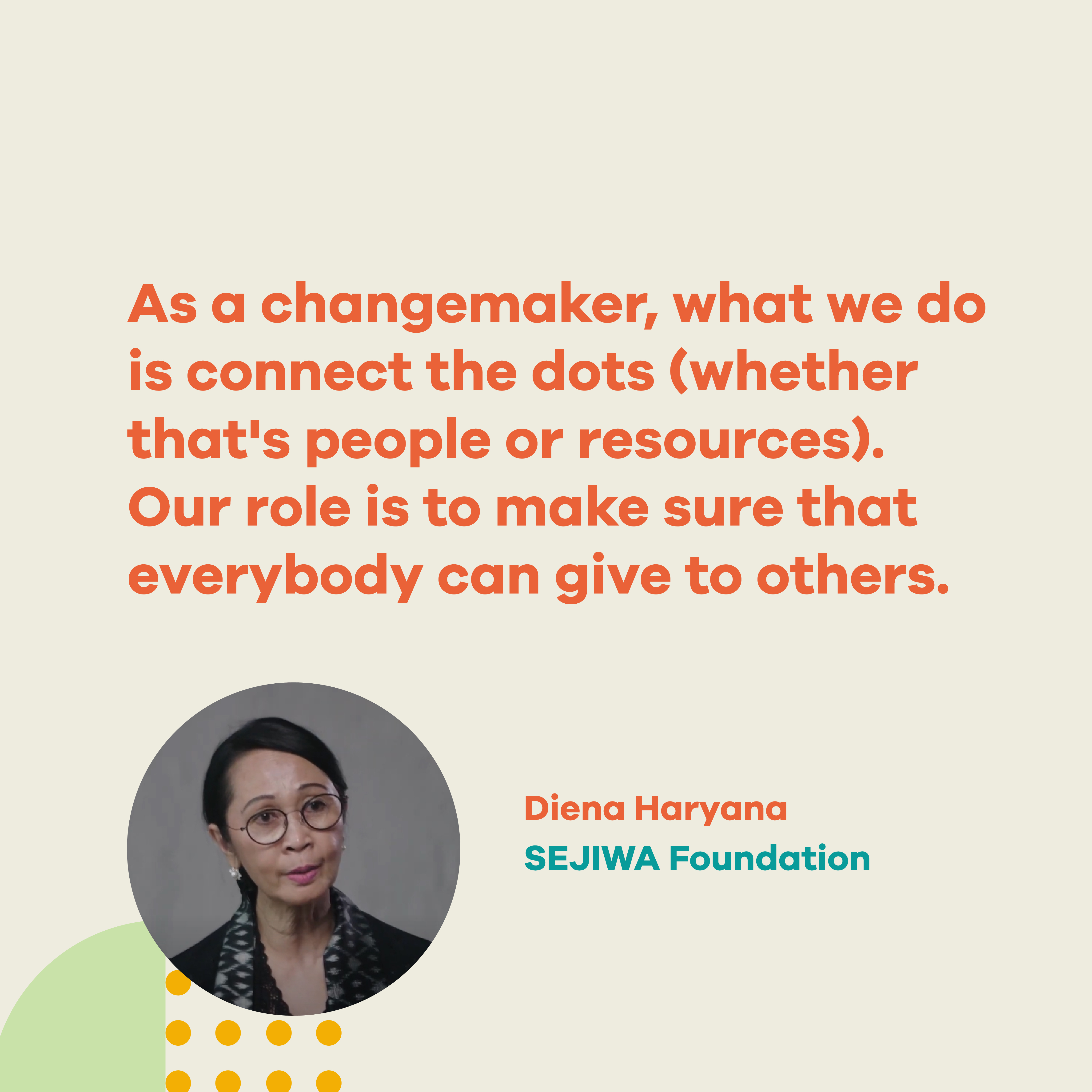 “Being a changemaker, you’re not always popular [with] other people… I received quite a lot of resistance,” said Diena, in a conversation with Catherine S., an Ashoka Young Changemaker, in one of the “Stories of Impact” videos by Ashoka Southeast Asia.

“You try to rock the boat… You try to shake the comfort zone. So I don’t think people are happy,” she said, reflecting on her own experiences crusading for changes in the parental methods in her country, moving from violence to empowerment.

“[But] there are always people who embrace what you do, trying to help you, push you and… support you with whatever you have,” added Diena.

The Ashoka report said a structured mentoring program for young WSEs that can help bridge the skill development gap and inspire them in their personal journeys as changemakers.

In 2021, Ashoka, in partnership with Deutsche Bank and S&P Global Foundation, spearheaded such a program, with a three-month online capacity building project called DIWA, which stands for Deepening Impact of Women Activators. The program was designed as both a learning journey for WSEs in Southeast Asia and a creation of a strong community between elder mentors and young leaders.

Similar to Diena, Catherine, who was elected as an Ashoka Young Changemaker in 2021, faces many challenges in her work, primarily in breaking glass ceilings. The founder of Girls Learn Code in Indonesia, her platform allows girls to nurture their passion for coding, connect with women in the tech industry, and challenge the status quo in a male-dominated arena.

Her biggest obstacle, she said, is her lack of self-confidence, especially when she finds herself surrounded by older people who may not listen to what she has to say. 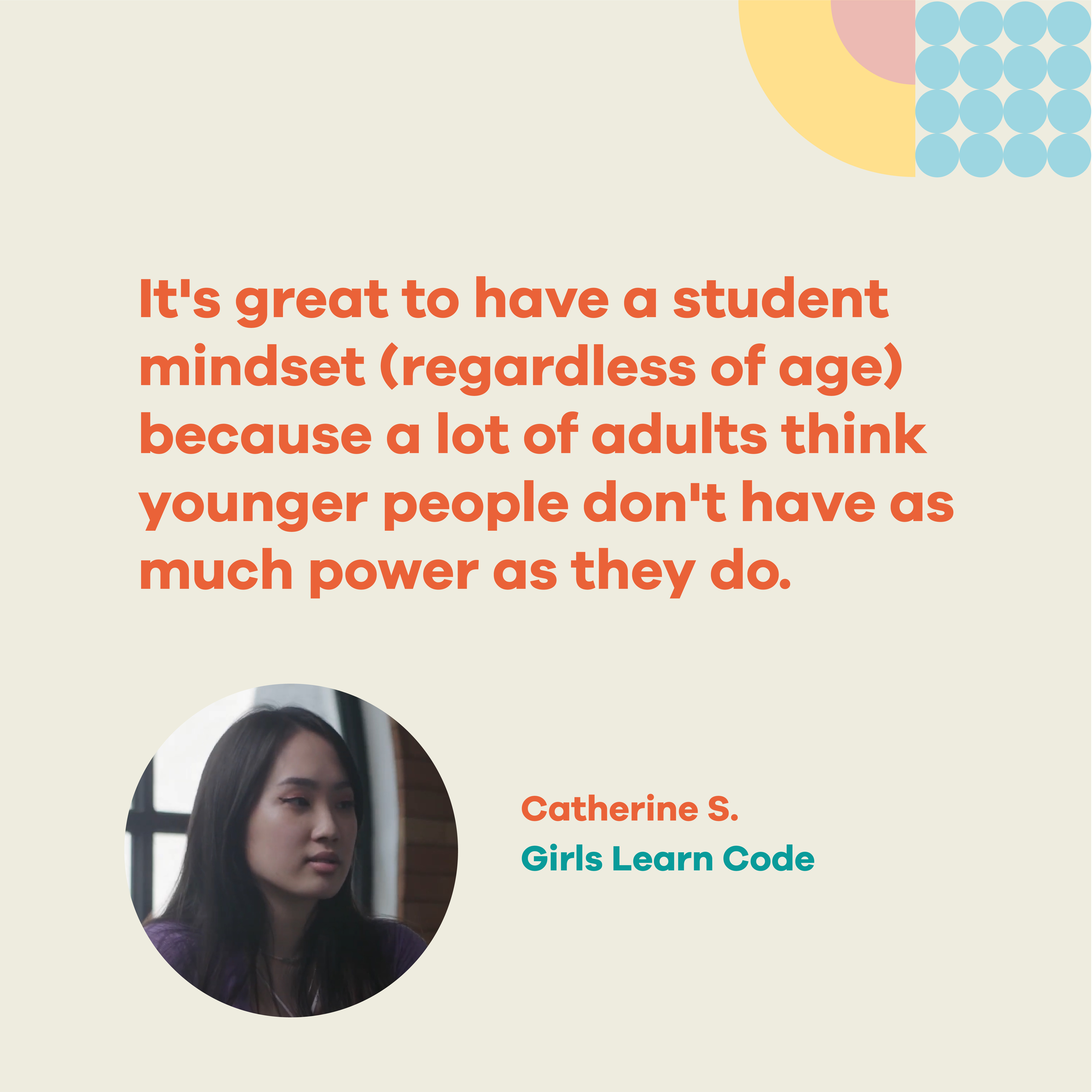 “I have this doubt in my mind, saying like, ‘these people probably know more than me.’ Or I might say the wrong thing,” she said. To overcome this challenge, she said: “I’m trying to surround myself with people who impact me positively.”

Even though she is much younger than established women social entrepreneurs in the region, Catherine said that she can also share many lessons to her elder peers from her own experiences in her work.

“I think one thing that older people can learn from me is maybe how to unlearn the things you’ve learned,” she shared with Diena. “There’s no denying that social norms that [are] implied should be shifted… My generation tends to be more open-minded and [have] tolerance toward these things.”

Over the years, Catherine said she has learned to absorb lessons from all around her, something that she wishes that her elder peers would learn from her age group. She cited a teacher from her school who used to tell them that despite his profession, he remains a student to this very day.

“I know it’s not an easy process to try to unlearn something you’ve already learned… But I really think it’s something worth learning,” she said.

With Tuenjai and Pianporn Deetes, the passion for change runs in the family, and in particular, in these two generations of women leaders working in grassroots movements in Thailand.

Elected as an Ashoka Fellow in 1990, Tuenjai founded the Hill Area Development Foundation to build the capacities of hill tribes in Northern Thailand. Her daughter Pianporn followed the elder Deetes’ storied career in social environmental justice and is now working as a communications director for the Southeast Asia program of International Rivers. She was inducted into the Ashoka Fellowship in 2006, nearly two decades after her mother.

Both women work closely with local communities in their country through inclusive and holistic approaches. With their work, these communities become able to meaningfully participate in decision-making over their natural resources, such as rivers and watersheds.

Now in her 40s, Pianporn said being in the middle of the younger and older generations of changemakers presents a bigger task for their age group.

“Our role is to support the elders to carry their mission, while also supporting the younger generation [so that] more and more of them become social entrepreneurs,” she said. “Our generation is the one in power.”

Tuenjai agreed, emphasizing that the young generations could shape the future of the world and the generations after them.

“The young generations would achieve the society of love and kindness, [peace] and harmony,” she said.

With generations of women social entrepreneurs after her, Tuenjai said it is also crucial that they set realistic goals in their advocacies.

“Even if you put [a] strong effort into your work, if [you] do not reach your goal, you may feel you’ve failed,” she said. “Be in the middle way.”

As younger changemakers like Catherine and Pianporn feel the weight of their responsibilities, veteran leaders Diena and Tuenjai said it is important that they also take care of themselves and look out for each other.

With the aid of technology, young people now are more supported and well-facilitated than before, said Diena. In this always-on environment, however, she cautioned that they also have to recognize the importance of rest.

“Don’t forget to stop, because you can [get] burnout if [you] don’t stop,” she said. “Sometimes we get carried away with what we do.

Tuenjai agreed, adding that both looking after their physical and mental health are necessary for their life’s work. 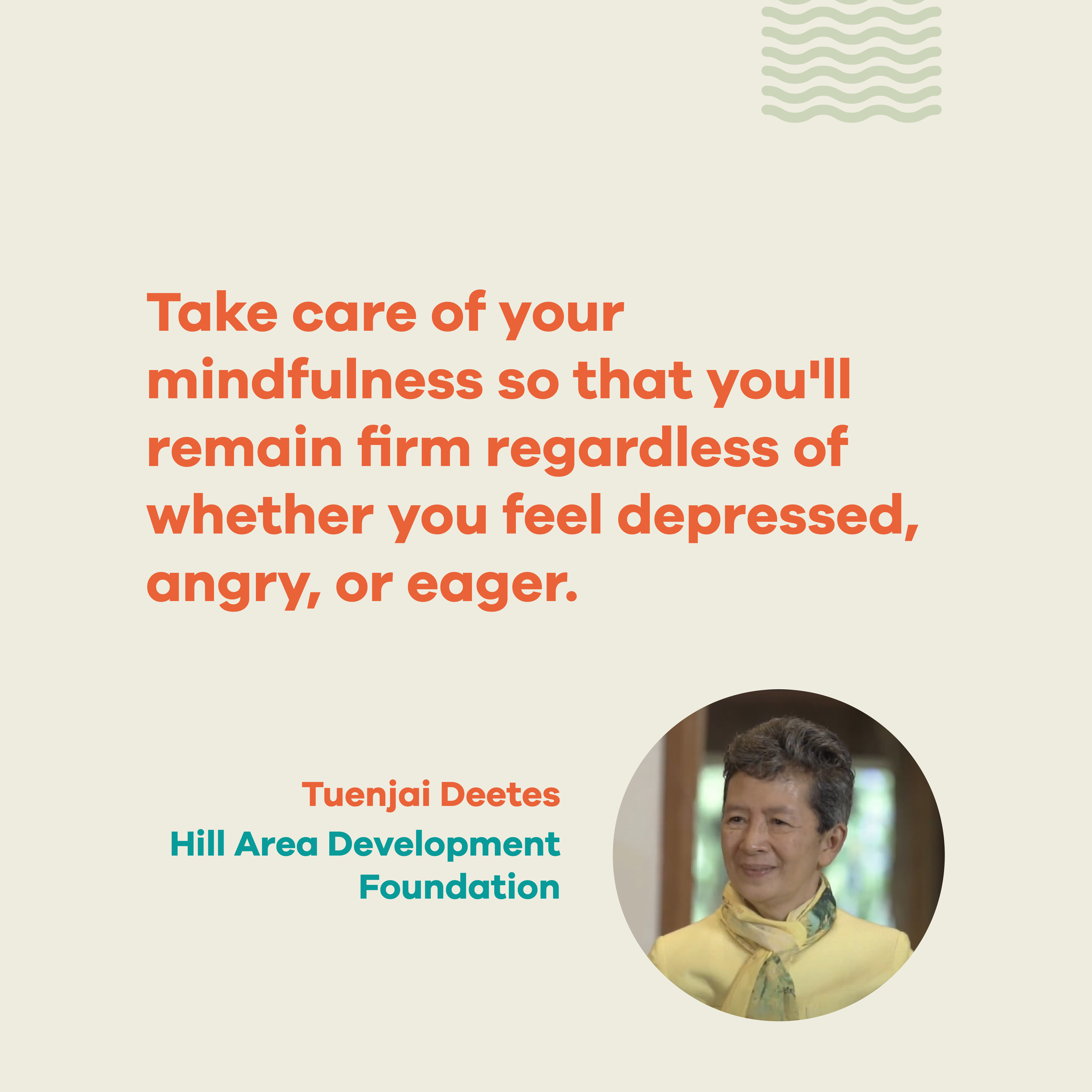 At the end of the day, humility, respect, and openness to work across sectors, backgrounds, and age groups are necessary to enact meaningful change. To be successful, Tuenjai reminded the young changemakers that it does not have to be solitary work.

“Throughout my journey, I met a lot of sister-friends… [These women] are ready to support you,” said Diena. “We do need to empower each other and be there for each other.”