In addressing women’s “multiple burdens,” change should start at home 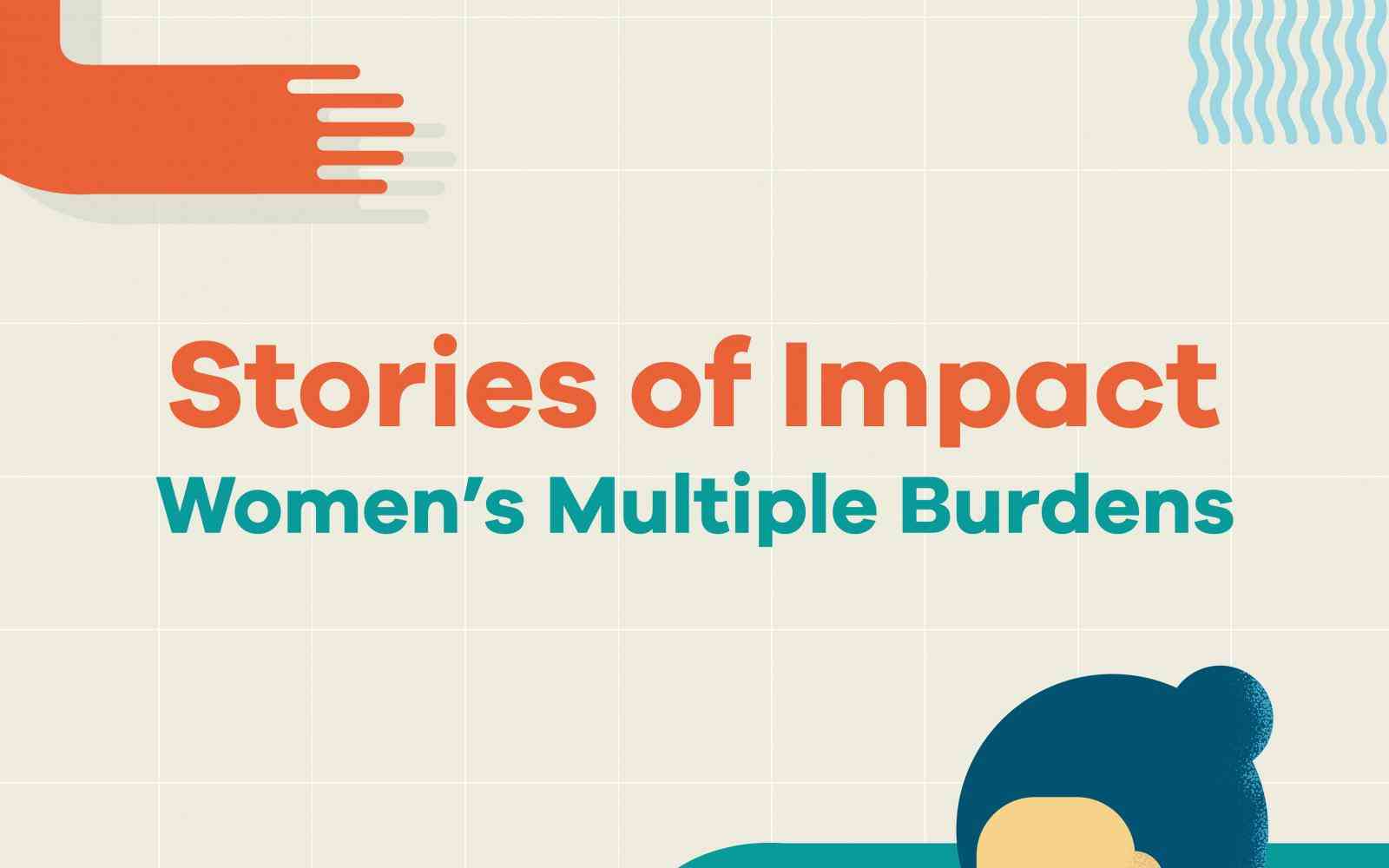 Way before the COVID-19 pandemic compelled people to stay in their homes, a vast majority of women around the world have already been performing arduous tasks in the confines of domestic spaces. Their work, however, is rendered invisible: responsibilities associated with housekeeping, caregiving, and raising children are often downplayed as simply inherent in their gender. Women are expected to naturally fill these roles, while also juggling their identities in social spaces, as workers, colleagues, and even leaders.

Where patriarchy still largely dictates gender roles, unpaid care work remains a deep-seated problem.  A 2019 report by the Economic and Social Commission for Asia and the Pacific, United Nations, said women in the region work the longest hours in the world. On average, they worked 7.7 hours daily, of which only 3.3 hours are paid. The rest is spent on unpaid care work, which, if included in the measures of the gross domestic product, would add US $3.8 trillion to the region’s total GDP.

In Southeast Asian countries, domestic work falls disproportionately on the shoulders of mothers, aunts, and daughters. Interviews with women social entrepreneurs for a report by Ashoka, in partnership with S&P Global Foundation, in 2020 revealed that gender expectations that are often dictated by cultural traditions were the most difficult obstacle to break free from. At least 10 percent more of the women respondents said they faced gender barriers compared to men.

Under a pandemic where economic uncertainties are high, this “heavy and unequal” gender division of labor is poised to get worse, according to UN Women.

To address these “multiple burdens” carried by women, changes should start at the same spaces where they often are tied down: among their families and in their very homes.

In Thailand and Indonesia, two women changemakers are leading the path toward this necessary change.

Growing up, Nattaya Boonpakdee witnessed gender inequality across three generations in her family. She saw the unequal value given to sons over daughters. Breaking free from expectations, she pursued careers that aim to solve structural problems in society.

Elected in the Ashoka Fellowship in 2012, she worked to mainstream conversations on gender equality and sexual health among young Thai people through a foundation that dispelled sexual stereotypes and misinformation in at-risk groups and communities.

Today, Boonpakdee leads the crafting of health plans for families, children, and the youth at the Thai Health Promotion Foundation, an autonomous government agency that promotes healthy lifestyles and choices in Thailand. 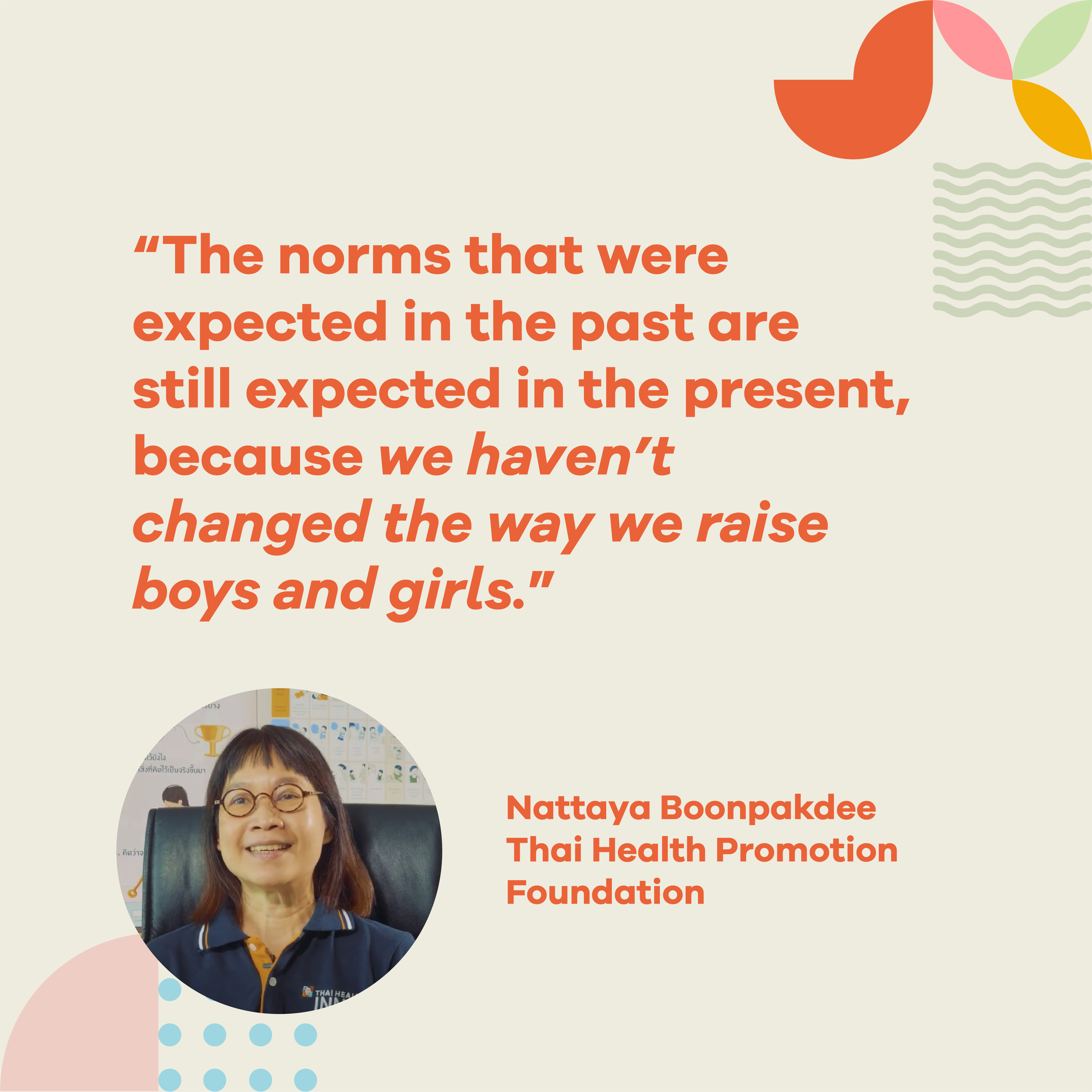 She said the expectations and demands on young children remain the same today, perpetuating the same cycle that allows gender inequality to persist.

“The norms that were expected in the past are still expected in the present, because we haven’t changed the way we raise boys and girls,” said Boonpakdee. Daughters are expected to learn how to cook and care for the home, impressing on them that these are duties they have to bear when they form their own families. Sons, meanwhile, get a free pass.

Young girls carry these physical and mental weights well into adulthood, where they find themselves in a balancing act with all these responsibilities they carry.

Boonpakdee cited research in Thailand and other countries that showed that some women choose to stay single due to this “double burden.” Women who start families, meanwhile, find themselves physically and emotionally worn out from juggling these tasks dictated by traditional norms for them alone.

“Career advancement [can also be affected], because [women] quit their job to raise their kid, and then go back to the workforce only when they have grown,” she said. In some cases, women who become pregnant also find themselves faced with termination from their employment.

For domestic workers, who are often women, both traditional gender norms and low regard for care work present challenges.

Lita Anggraini, an Ashoka Fellow since 2007, believes that it is important to capacitate them to protect their rights as citizens, people, and women.

She realized that education is key to empowerment.. She established the School for Domestic Workers in Yogyakarta, Indonesia, in 2003 to teach women different skills, help them negotiate fair employment contracts, and organize them.

It is a crucial step in Indonesia. According to the International Labour Organization, the country’s domestic workers are still not recognized as workers, even though there are at least 2.6 million domestic workers in the country, with around 110,000 under the age of 18. Millions more Indonesian domestic workers live abroad. All in all, they represent the “single largest group of female salaried workers” contributing to households within Indonesia or in other countries.

Realizing the need for a nationwide movement, Anggraini established the National Network of Domestic Workers Advocacy, or Jala PRT, in the following year. Under this umbrella organization, 26 citizen organizations and individual members push for women’s and labor rights, allow access to legal aid, and promote regional and national policies to protect domestic workers.

In a culture that encourages women to stay silent than speak up, the movement has encouraged them to find their own voices.

Anggraini said the majority of female workers in her country are in the informal sector, leaving them unprotected under the law and unable to access government services that could help with their already strenuous load.

“If they are infected [with COVID-19], they have no insurance… They also [do] not have employment social security,” she said. “Domestic workers [who are] getting older do not have savings.”

Informal workers, she said, get paid between 10 to 30 percent below the minimum wage, calling this impoverishment systematically set up for women.

Considering the duties that these same domestic workers have in their own families and homes, Anggraini said: “Female roles are bigger, twice or more times bigger than male roles.”

“The female work hours are much more than the male’s, but the appreciation of redistribution for well-being is one-third of the male’s,” she added. 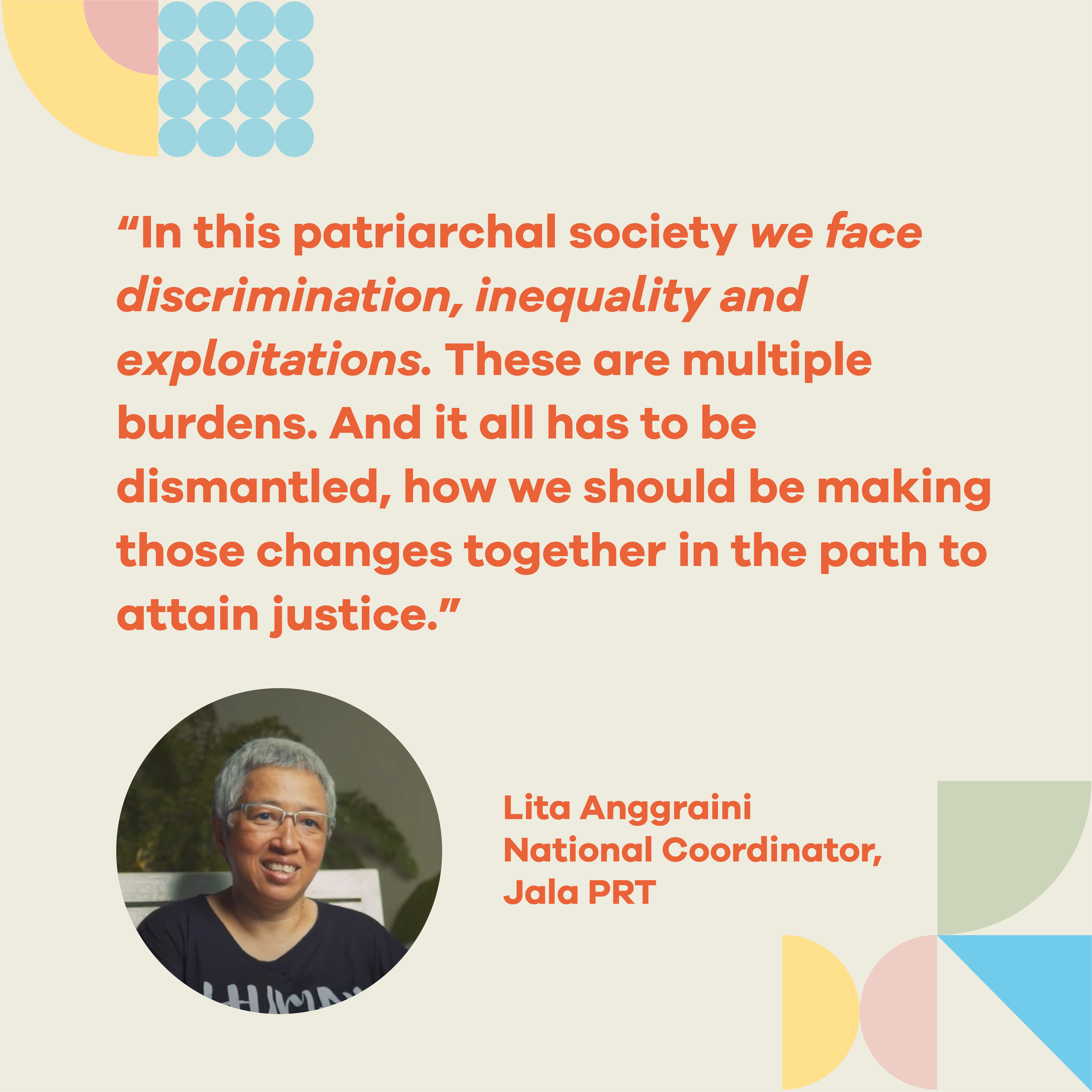 Much work remains to be done to achieve gender equality and quash gender norms in care work.

Government policies can help alleviate these burdens off the shoulders of women, as well as protect their rights. For instance, having adequate support and programs for accessible child care—among the biggest tasks often entrusted to women—can help lighten the load. Having safe and accessible daycare programs can reduce the workload at home.

Care and domestic work should also be recognized and supported as legitimate work that requires appropriate remuneration.

“If your wife quits a job to take care of your child, who pays her? No one,” said Bonpakdee. “In some countries, the government pays for the child support to the father or mother who has to quit their jobs.”

At the end of the day, these changes in toxic gender roles should begin in the homes of these women themselves.

Anggraini said that there should be a fair division of work inside the household—a behavioral change that requires fathers, uncles, and sons to break free from the stigma of domestic work.

“We will have to sit and talk about this,” said Bonpakdee. “The change should start from yourself and the people surrounding you, or… with your own family.”